New Release: “I Am A Patriot” Music Video Directed by Keri Pickett 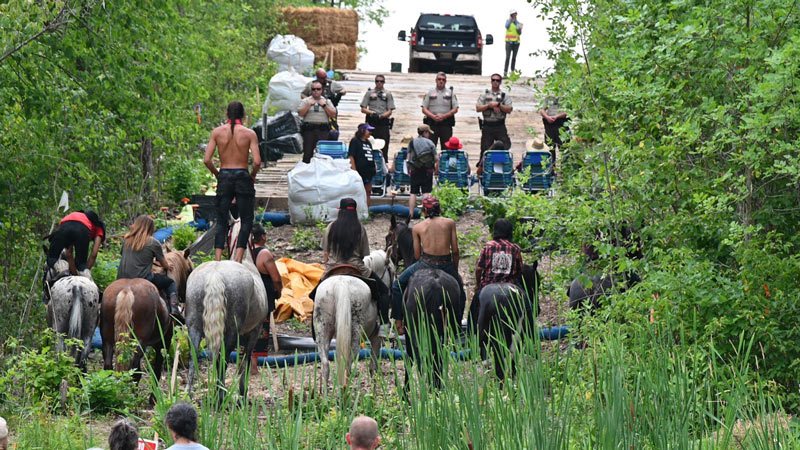 CALLAWAY, MINN., — November 22, 2021 – The Enbridge Line 3 tar sands oil pipeline may be operational in northern Minnesota, but efforts to raise more awareness, funds and efforts to stop it continue to inspire. Now the singer-songwriter Jackson Browne’s impassioned version of “I Am A Patriot” (written by Steven Van Zandt, actor, songwriter and legendary E Street Band member of Bruce Springsteen’s group) serves as the musical frame to tell part of the Line 3 resistance story in a new documentary short music video by Honor the Earth media makers and award-winning director Keri Pickett.

The new music video — “Shell River Seven #StopLine3” — features seven courageous women* (including one journalist arrested while working). On a hot 2021 summer day of extreme drought in northern Minnesota, they came together in prayer and song on the Line 3 construction easement near Park Rapids, on 1855 treaty territory, to protect the Shell River. All were eventually arrested.

Directed and edited for Honor the Earth by veteran photographer and filmmaker Pickett, it was shot by Honor the Earth’s River Akemann and Sarah LittleRedfeather and others. The fast-paced film captures the stand-off at the river’s edge, told with moving documentary footage and short descriptive captions. Driven by the song’s  repeated proclamations about how “the river opens for the righteous,” the lyrics pair beautifully with the video’s poignant view of water protectors peacefully facing off with police, resulting in another moving chapter in the Line 3 saga. The film also encourages viewers to urge public officials to Drop the Charges​ and visit Honor the Earth to get involved.

Last spring, Pickett, Akemann, LittleRedfeather and songwriter and activist Larry Long teamed up with a host of Indigenous artists, Pura Fe, Soni Moreno and others, plus Bonnie Raitt, Mumu Fresh, The Indigo Girls and U.S. National Poet Laureate, Joy Haro, to create the Rock the Cause single and documentary short music video, “No More Pipeline Blues (On This Land Where We Belong).” To date, that work has been championed and shown at more than 10 film festivals around the world.

“’I Am A Patriot’ is one of Winona’s favorite songs, “so this cool Jackson Browne and Steven Van Zandt partnership opportunity seemed the perfect way to show how her ‘grannie sit-in’ and arrest on the Shell River makes her a patriot, especially since she had a Treaty Camp there for months,” notes Pickett. “Even though I wasn’t there on the day of her arrest, I was moved by the brave actions of the water protectors and so honored to be able to share the story of the ‘Shell River Seven’ thanks to all talented media makers present that day. As a visual artist, Winona’s response to Enbridge Energy’s bad ideas has been the center of my focus for eight years now, and each year my respect and honor grows for water protectors actively working to protect the sacred water and wild rice. I hope hearts will be changed by this new film.”

“We’re so honored and grateful to have this powerful song about freedom and love of country to help tell the story of how a Canadian pipeline company, Enbridge, has corrupted our lands and waters with a polluting tar sands pipeline that is the equivalent of 50 coal-fired power plants,” says LaDuke, who spent three days in jail after being cuffed with a zip-tie at the Shell River.

“More than 1,000 arrests were made over months as water protectors sought to Stop Line 3 as it runs under 22 rivers and more than 200 water bodies, including the Mississippi River twice!” she adds. “During the construction, Enbridge breached an aquifer in January 2021 but covered it up. Since then there have been 28 frac-outs and two other aquifer breaches, the locations of which have yet to be identified by state authorities. This emboldened new music video is a testament to water protectors who regularly put their lives on the line at this time when climate crisis is here and the planet is under a Code Red.”

”The Shell River Seven” include:

For more information – and or to interview members of the Shell River Seven and or the filmmakers – please contact Martin Keller, Media Savant Communications, 612-220-6515, mkeller@mediasavantcom.com